Day 1 Istanbul
On the first day of this tour you’ll be transferred to your hotel in Istanbul from the airport right after your arrival. Overnight in Istanbul.

Day 2 Istanbul Old City
Today right after breakfast, we’ll depart to explore one of the most popular cities in the world, Istanbul to learn about its culture and history and witness their impact on the monuments and attractions around such as Blue Mosque, Hagia Sophia, Topkapi Palace and Hagia Irene. If you’d like to discover more of the city you’ll have to opportunity to join our optional Half Day Bosphorus Cruise Tour in the afternoon. Overnight in Istanbul.

Day 3 Gallipoli Battlefields
Visiting the WWI Battlefields of Gallipoli including Lone Pine and Chunuk Bair Memorials, ANZAC Cove, The Nek, Johnston’s Jolly, original trenches and tunnels today may be emotionally effective however it’ll give us the chance to commemorate ancestors. Overnight in Çanakkale.

Day 5 Ephesus, Kusadasi
An unforgettable visit to the world famous ancient city Ephesus to see the Celsus Library as well as the Ephesus Theatre, followed by a short visit to the site of The Temple of Artemis. The tour ends after a visit to Sirince village which is worth visiting for its fruit wines and Greek-Turkish architecture. Overnight in Kusadasi.

Day 6 Pamukkale, Hierapolis
Top this trip off with Hierapolis and Pamukkale where you can swim among the ancient columns in a naturally formed thermal pool as the Romans did for healing and treatments. Overnight in Pamukkale.

Day 7 Silk Road, Konya
Before arriving to Cappadocia, on the way we travel along the ancient Silk Road and visit Sultanhani Caravansary as well as the Mevlana Museum in Konya. As we arrive in our hotel in Cappadocia, you’ll have the chance to join a traditional Turkish folklore night optionally. Overnight in Cappadocia.

Day 8 Cappadocia, Goreme, Underground City
Another day to marvel at the wonder of nature, the tall, cone-shaped rock formations known as fairy chimneys at the Goreme Valley Open Air Museum. They’re the consequence of a geologic process. Million years ago volcanic eruptions dumped ash on the ground. The ash solidified into tuff, then erosion began.

In time, with the erosion, the softer tuff wore down and formed the fairy chimneys which reach up to 130 feet tall. We’ll end the day with a visit to one of the underground cities in the area, used as shelters throughout the history. Overnight in Cappadocia.

Day 9 Ihlara Valley
A day to get connected with the nature in Ihlara Valley where we’ll see the Selime Monastery and the fantastic view of Yaprakhisar. Overnight in Cappadocia.

Day 10 Cappadocia to Istanbul
On the last day after breakfast, you’ll be transferred to the airport in Cappadocia for your flight to Istanbul. 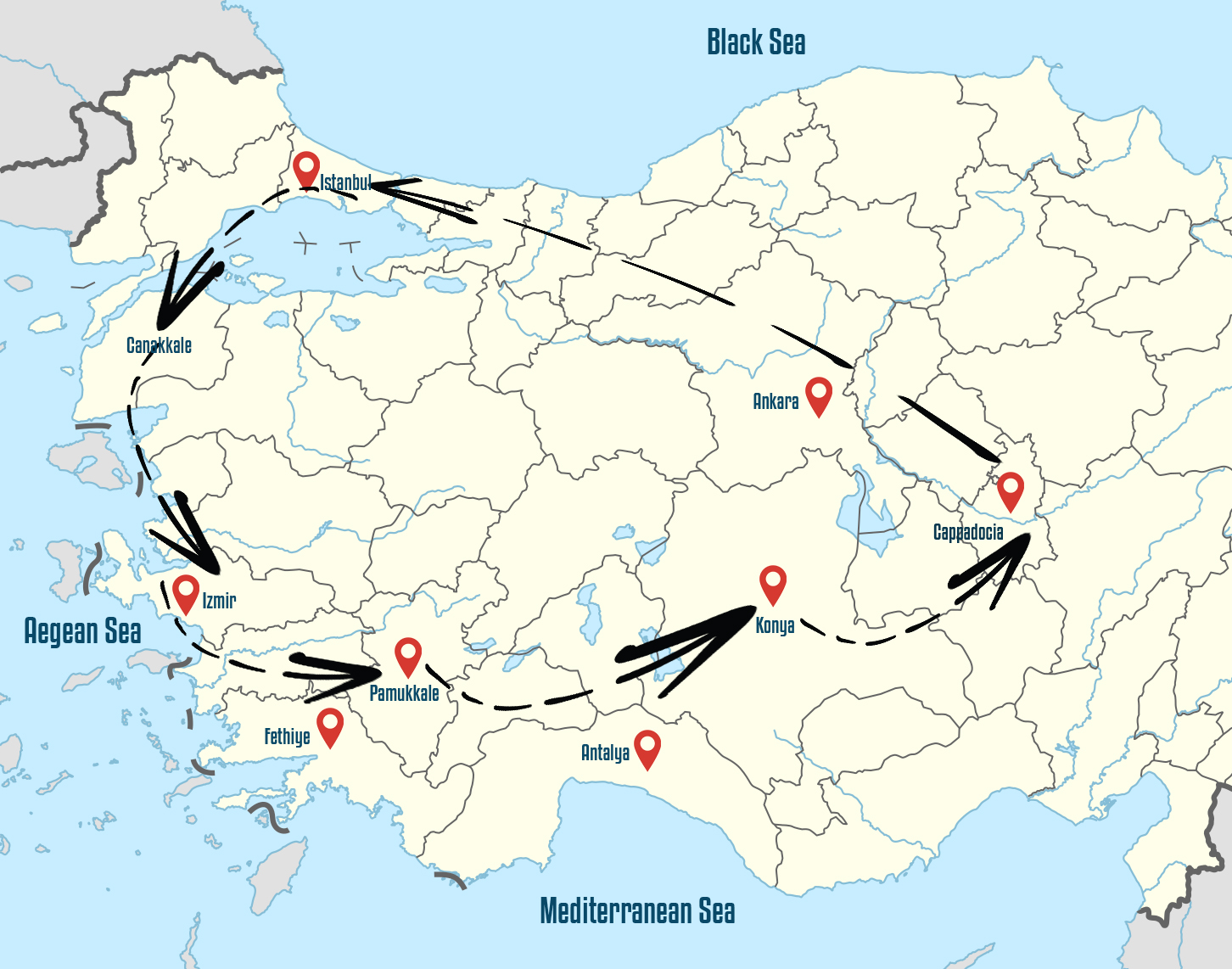 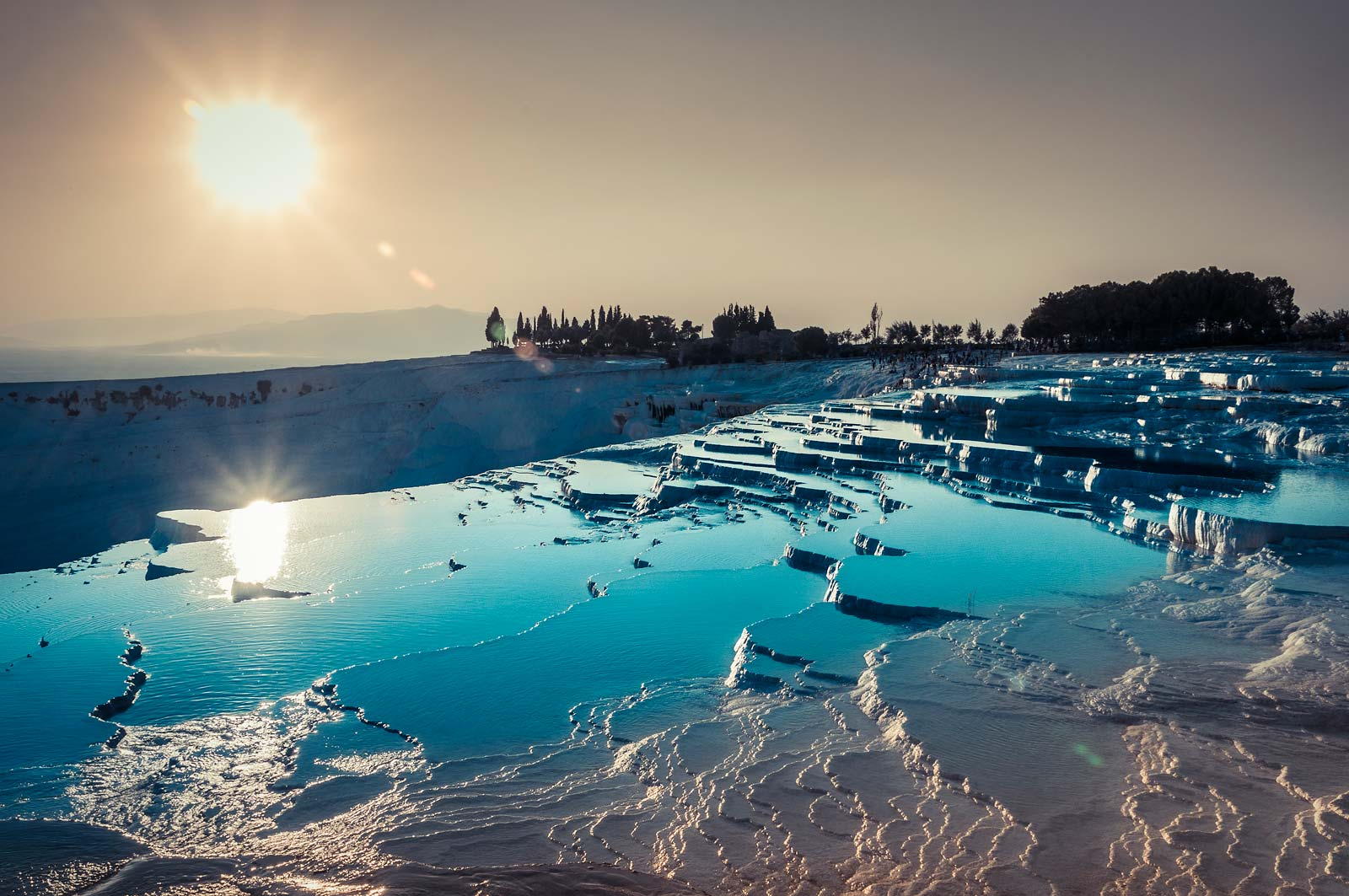