Day 1: Welcome to Istanbul
On your arrival at Istanbul Airport or Sabiha Gokcen Airport, you will be transferred to your hotel. Free time after you check in the hotel. Overnight in Istanbul.

Day 2: Istanbul
After breakfast, we’ll go to the Blue Mosque, St. Sophia, Topkapi Palace (including Hagia Irene) (closed on Tuesdays), Hippodrome, and Grand Bazaar. The Grand Bazaar (closed on Sundays) is one of the world’s largest covered markets, with thousands of shops and stalls spread across nearly 60 blocks. We also go to a carpet shop and learn how to make carpets by hand. Overnight in Istanbul.

Day 3 Istanbul
In the afternoon, take a cruise between two continents on the stretch of water that separates Europe and Asia with an optional ‘Half day Bosphorous cruise.’ Travel to Cappadocia by plane. Pick up from the Cappadocia airport. Overnight in Cappadocia.

Day 4: Northern Cappadocia
In Cappadocia, we will pick you up from your hotel in the morning. The first stop is Esentepe, followed by Uchisar Castle. Then we go to the Goreme Open Air Museum and the Ortahisar Castle. Following that, we go to the Pasabag Fairy Chimneys and then to Devrent Valley. Overnight in Cappadocia.

Day 5: Southern Cappadocia
We’re off to Pigeon Valley and then Red Valley this morning. After seeing the cave churches, we go to the underground city, then to Cavusin village, and finally to Avanos town, where we learn about hand-made pottery. Overnight in Cappadocia.

Day 6 Cappadocia to Izmir
After breakfast you will be transferred to the airport for your flight to Izmir. Overnight in Kusadasi.

Day 7 Ephesus
Pick up from Izmir airport to absorb yourself in history today with a guided tour of the site of one of the Seven Ancient Wonders of the world, the site of Temple of Artemis and the ancient city of Ephesus. Feel the mystical atmosphere of the city and stadium where chariot and horse races were once held.

You will also have the chance to experience some Turkish handicrafts and to visit the former Greek village of Sirince, located on the top of a mountain and famous for its fruit wines and tastings. After the visit of Sirince you will turn back to your hotel. Overnight in Kusadasi.

Day 8 Pamukkale
This morning we will enjoy a display of locally handcrafted leather goods before heading to the magnificent white calcium terraces, known as Travertines, in Pamukkale where we also tour the ancient city of Hierapolis. Take a dip, amongst ancient columns, in the hot springs that were used in Roman times for their theapeutic powers.Overnight in Kusadasi.

Day 9 Kusadasi
After breakfast our tour concludes and we say goodbye to our new friends and you will be transferred to the airport for your flight to Izmir. 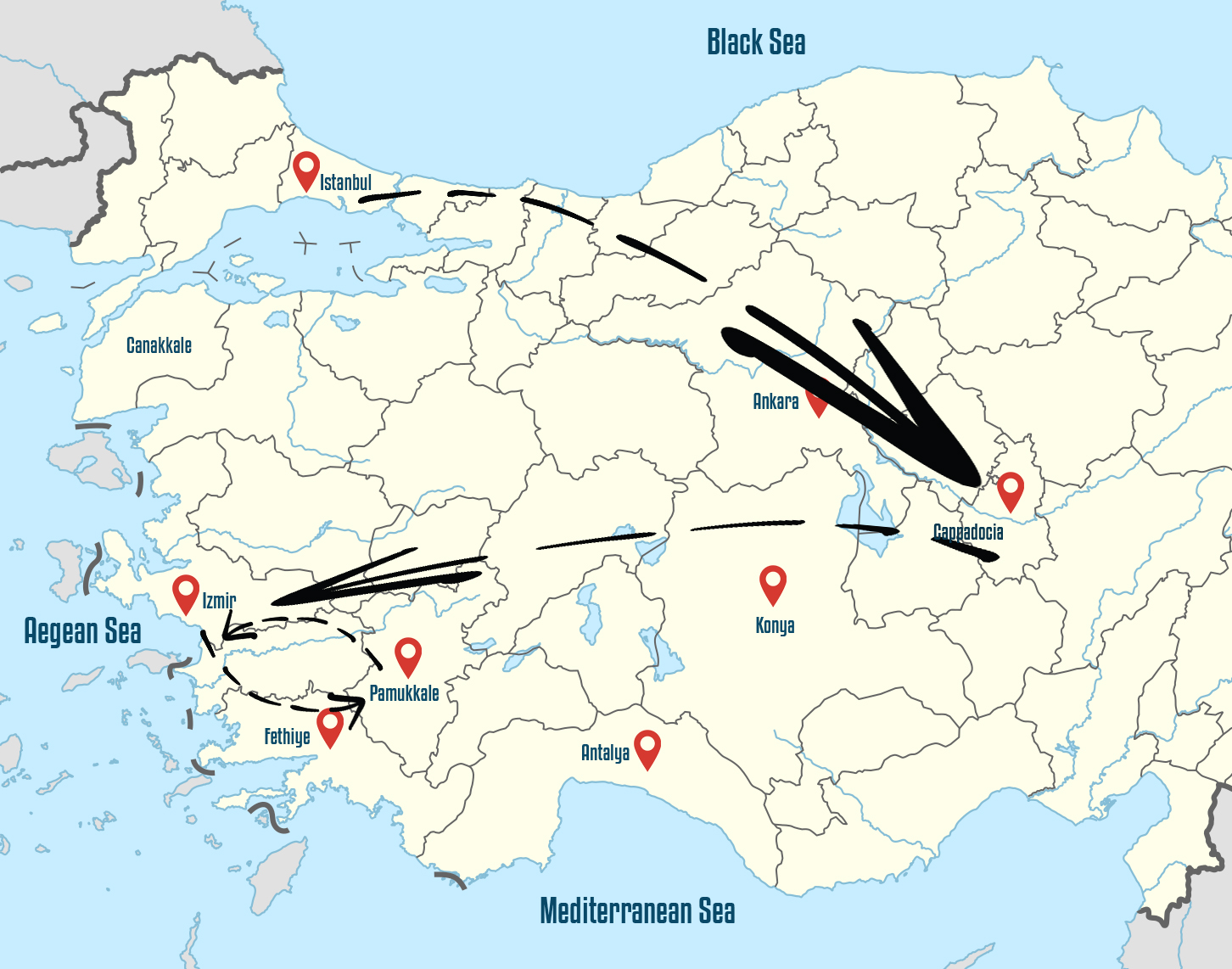 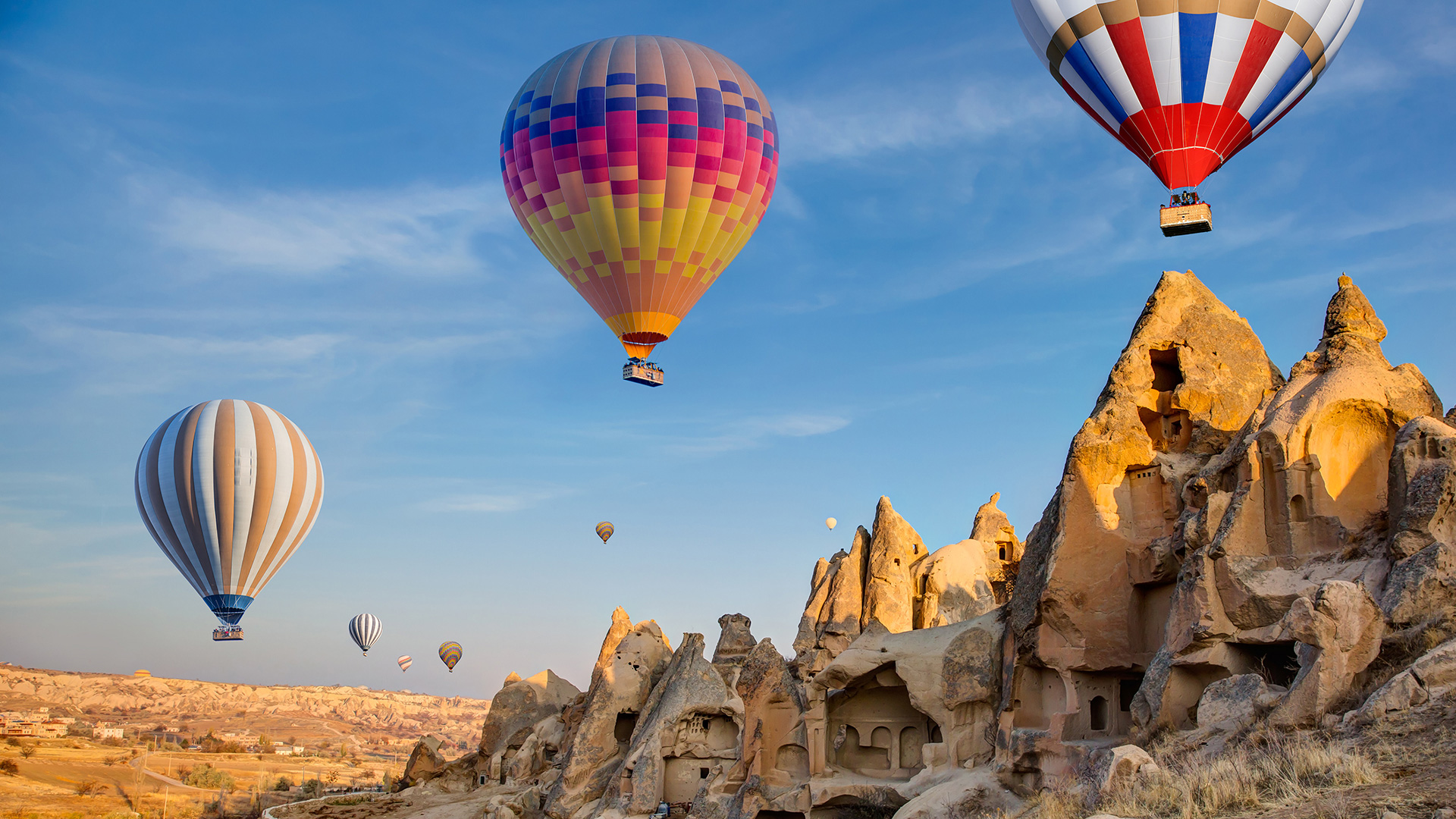